When one of our colleagues does something special, all of us at Pauwels Consulting are proud. Dr Veerle Deblauwe, an expert in patent search, recently published an article following the Search Matters conference in The Hague. So, high time for a chat with this special woman, to find out who she is and what she does. Welcome to the wonderful world of patent search.

Veerle, can you tell us a little bit about yourself?

Veerle: My name is Veerle Deblauwe. I’ve been researching and analysing patents and other scientific information, something known as patent search, for more than fifteen years. In addition, I’m a member of the Belgian Patent Information User Group and the Werkgroep Octrooien Nederland.

Mainly, my experience has been with patents and scientific research for the polymer chemical industry, the construction industry (such as roof tiles, slates, plasterboard panels and fibre cement cladding) and the pharmaceutical industry. I’ve been working as a consultant at Johnson & Johnson for five years, the last year of which was via Pauwels Consulting.

You must have an extensive academic background, presumably?

Veerle: I studied at the University of Leuven, where I completed both a master’s degree and a doctorate in organic and macromolecular chemistry.

Can you explain to the layman what patent search is?

Veerle: A patent describes an invention in detail and grants the owner the exclusive right to produce and market this invention. In essence, patent search means checking if a patent has already been published for a specific invention.

It’s an important discipline because a patent is only granted for truly new or innovative inventions. With every new product or process, a check also has to be carried out to verify that there is no infringement of existing patents belonging to others. In jargon, this is called a ‘freedom to operate search’.

In addition to a number of other sources, I mainly search in patent literature, the collection of patent documents. That is a major challenge, as you have to know your way around existing databases very well. That’s not a simple job, because they are constantly evolving, and you really have to keep your eye on the ball. 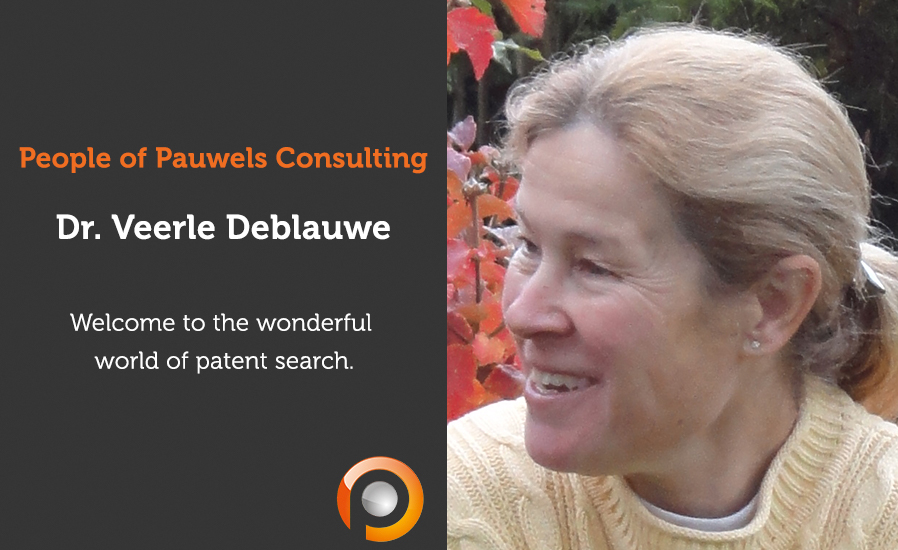 Can you tell us more about your current job?

Veerle: I work permanently for Johnson & Johnson worldwide, for scientists, researchers and patent attorneys. I work in a small team of two, the chemical patent searchers, which only consists of colleague George Chiu from the United States and myself.

It’s very important for us to complete our assignments within deadlines with a critical attitude and scientific curiosity. At the same time, however, we have to be flexible enough to deal with urgent requests that arise in the meantime and need to be handled quickly.

Is it true that an article of yours was published recently?

Veerle: Yes. On 23 to 25 April 2018, the Search Matters conference returned to The Hague. This international conference is organised every year, alternating between The Hague and Munich. It was organised by the European Patent Office, which appointed Sofia Pires of the University of Alicante and me as rapporteurs. The result appeared in the September edition of World Patent Information, a magazine specialising in my field of work.

It was fascinating to be able to attend the conference from this perspective. By the way, I’ll also be attending the Patent Information Conference in Brussels in November, another conference organised by the European Patent Office.

Is it possible to combine these conference visits with your current tasks at Johnson & Johnson?

Veerle: Yes, no problem at all. After all, these conferences are relatively short. At Search Matters, for example, I was only present for two days.

Great to hear that you can combine all these things, Veerle. Congratulations once again on your publication and thanks for the interesting interview!

Do you have any questions for us? Let’s get in touch!